The Untold Story of Skin Microbiota

The gentle power of the skin microbiota

One of the biggest concerns in the personal care is how to formulate for the sensitive skin. This is because the number of allergies and skin reactions in sensitive skin is significantly rising. Moreover, the consumer became extremely demanding and cannot accept any mistake from any cosmetic brand anymore.

Brands are nevertheless doing their best to respect the human skin. They use mild emulsifiers; safe preservatives and they are limiting perfume. But even then, they still can face some complaints from the consumer. In order to formulate bullet proof cosmetics, brands need to do extra efforts to go to the next level of skin mildness and enter the unexplored area which is the skin microbiota.

For the microorganisms the skin is their sole source of food. The skin provides them with:

The skin and the skin microbiota are not separated layers. As a matter of fact, both layers work together and are intertwined. They thrive in a kind of successful marriage. Both layers need each other and help each other. Together they are one. They form one gigantic impregnable barrier against the environment and all its threats.

But the skin microbiota’s activity goes far beyond cleaning, as it transforms the skin garbage into precious substances such as:

The struggle for survival

Moreover, the skin is a hostile dessert without any water. The parts of the skin exposed to the environment are constantly flogged by drying winds, stealing away the last molecules of water. Because water is life essential, microorganisms need to use all their power to entrap each droplet of water by producing glycerine and biofilm proteins.

The skin microbiota can produce all these impressive substances, but to do so, they also need food, a lot of food. Unfortunately, the skin is not producing high quality food. Therefore, the resident members of the skin microbiota created an ingenious food network, where each piece of food is recycled and distributed amongst each other. No food is wasted. This food web amongst the resident skin microbiota members is represented in figure1.

The protective skin microbiota is facing additional challenges. In our modern society the skin and the skin microbiota are exposed to pollution. The excess free radicals, fine particles, heavy metals and solvents coming from aerial pollution require from the microorganisms even more energy and by consequence more and more appropriate food. 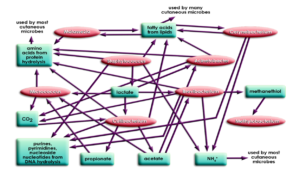 The endless power of the skin microbiota is not so endless

The skin microbiota seems to have an endless power to overcome all these threats:

The next level of skin protection

As mentioned above, the classic cosmetic formulations are merely focussing on being mild for the human part of the skin. The effect a formula might have on microbial organisation is ignored. In order to develop safer and milder cosmetic formulation it is crucial to focus additionally on the skin microbiota. In personal care these 3 main strategies are being proposed:

Skin microbiota mild means that the formulation has:

However, this is quite difficult to prove and to realize as cosmetics contain preservatives, surfactants, emulsifiers. Table 1 shows the maximum adverse impact these ingredients might have on the number of microorganism and how these ingredients disturb the delicate balance between the members. For example, preservatives can destroy up to 90% of our microbial protection within less than 1 hour. This means that it only takes 1 hour to expose the skin to the hostile environment.

Table 2 demonstrates the influence of certain common cosmetic ingredients on the growth of each individual specie. Even innocent ingredients such as water influences the skin microbiota. 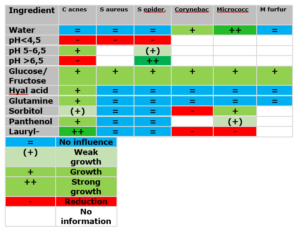 Table2: Influence of common cosmetic ingredients on the growth of skin microbiota species.

Inulin is such a powerful skin prebiotic. Inulin is a sugar polymer extracted by water only from:

Inulin can be directly fermented by 3 valuable members of the protective skin microbiota and food web:

The way Inulin supports the protective skin microbiota is demonstrated in figure 2.

Figure 2: The feeding of Inulin.

Biolin: An Inulin for Baby care

A special purified grade Inulin (Biolin) for baby care supports atopic babies in their struggle with redness and infections.

Biolin: An Inulin for Intimate care

50 female patients suffering regularly from discomfort, irritation, C albicans and G vaginalis infections were medically treated. When their complaints disappeared and they started using daily an intimate wash, the symptoms of infection and irritation reappeared. However, when the same wash was enriched with 1.5% Biolin, the complaints didn’t reappear anymore.

Biolin strengthens the vaginal microbiota in its daily struggle with the hostile environment. 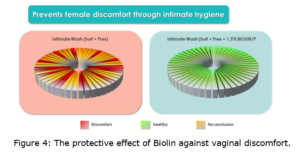 A radical stress situation for the skin microbiota is the treatment of the skin with alcohol (ethanol). Alcohol can change the balance between the protective microbiota up to 63%. The skin protection is seriously weakened. When this aggressive alcohol is combined with 1% preBIULIN FOS, a highly soluble Inulin, the skin microbiota was only disturbed by 28%.

The purpose of using sanitizers is to eliminate dangerous microorganism. Not to eliminate our natural microbial protection.

Skin explants were contaminated with the pathogen S homininis. When the skin explants were treated with alcohol the S homininis was reduced. However, when the skin explants were treated with alcohol and preBIULIN FOS, the S homininis was killed 60% more efficiently. Inulin, being a natural polymer of glucose and fructose cannot exert any anti-microbial effects. The explanation for this observation lies in the fact that when alcohol is used alone, it kills all microorganisms: both pathogenic and protective. When Inulin is combined with the ethanol, the ethanol still kills, but the inulin helps to bounce back the protective skin microbiota only. When the protective skin microbiota feeds itself on inulin, it gains enough energy to produce anti-microbial peptides that are undoubtfully more efficient than ethanol. Inulin allows the protective skin microbiota to take over control again.

preBIULIN FOS perfects antimicrobial properties of sanitizers or other products with anti-microbial purposes. 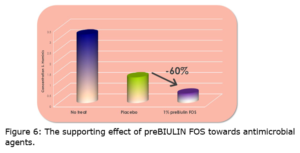 preBIULIN AGA: An Inulin to milder leave on products

A special distilled inulin from agave and chicory with an exceptional high molecular weight strengthens the skin microbiota and by consequence the skin against known and unknown disturbing ingredients. 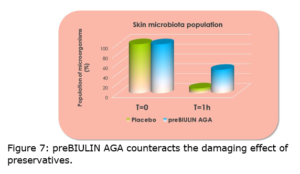 Surfactants disturb the activity of microorganisms due to their chemical nature. A natural surfactant can disturb the microbial skin protection by more than 20%. The same surfactant combined with preBIULIN FOS is not disturbing the skin microbiota at all. Hence, shampoos and shower gels containing preBIULIN FOS are much milder for the skin microbiota and for the skin on the long term.

Increasing the diversity of the skin microbiota

One of the proposed strategies is to increase the number of different members of the skin microbiota. More different members might mean more diverse protection. It is indeed correct that when an infection occurs (dandruff, acne) the skin is dominated by only a few microorganisms. In case of an infection the diversity needs to be significantly increased.

However, when the skin is healthy, the diversity is healthy and aligned with one’s lifestyle. It would be a risk to change/increase the diversity that is in balance. There is no scientific proof that a higher diversity leads to a healthier skin. On the contrary a well hydrated skin has a lower microbial diversity, than a dry skin.

It is crucial to approach to cosmetic products as to a food source for the skin microbiota. Since our knowledge of the skin microbiota is too limited, it is a good strategy to make the skin microbiota stronger. It means to make it independent to the influence of ingredients. Prebiotics can do that in endless applications. Prebiotics are a powerful and efficient prevention of skin problems. A prebiotic such as Inulin is a valuable tool to maintain our skin beauty and an efficient weapon to keep unwanted organisms on a distance.