Mouthwash of the future

How to formulate a natural and sustainable mouthwash

A mouthwash yesterday and today

A classic mouthwash is focused on removing microbes. The idea behind this is that the less microbes, the less sensitive gums, the less tooth decay, the less infections and the fresher breath. The main ingredient to achieve the microbes’ reduction is the world-famous ethanol. Optionally, the ethanol is enriched with essential oils such as thyme, eucalyptus, menthol, peppermint, or an aroma to reduce the bad breath. You could consider a classic mouthwash as a perfume for the mouth. Ordinary mouthwashes work instantly, but their effect, especially on bad breath, is quickly exhausted.

The ethanol, besides killing microbes, has some other practical advantages:

A mouthwash of the future

A well-informed consumer of the future no longer accepts ethanol as it has unforgivable disadvantages:

The consumer is more informed about the protective microbiota. Indeed, the oral microbiota (700 species) protects us against diseases, tooth decay, sensitive gums, and bad breath in two ways:

In other words, the oral microbiota can only prevent and repair problems when it is complete and balanced. Ethanol is not selective and is equally disturbing in both aspects.

An ideal mouthwash has therefore the following characteristics:

Add A to B. Add the first 10% of phase A slowly. The rest can be added at a normal speed. 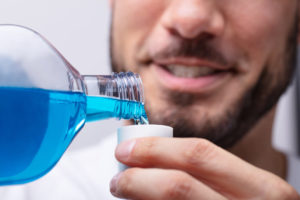